New kids on the Group 1 block in the Queensland Oaks

The name Caroline Jennings is not yet a household one in Queensland racing circles but come Saturday night, exciting filly Aravene might just push it closer to being that way.

The Victorian-based Jennings just has 15 winners to her name after starting out in 2019.

Aravene – a stunning last-start winner in Sydney – will not only be the youthful trainer’s first starter in a prestigious Group 1 event, but her maiden galloper in any feature race.

The Jennings stable – or Kennedy Racing as it is known – operate slightly differently to many of the barn’s that will be represented in Saturday’s Group 1 Queensland Oaks.

Jennings, who hails from Ireland, is the private trainer for James Kennedy, who made his name through the luxury watch and jewellry game. 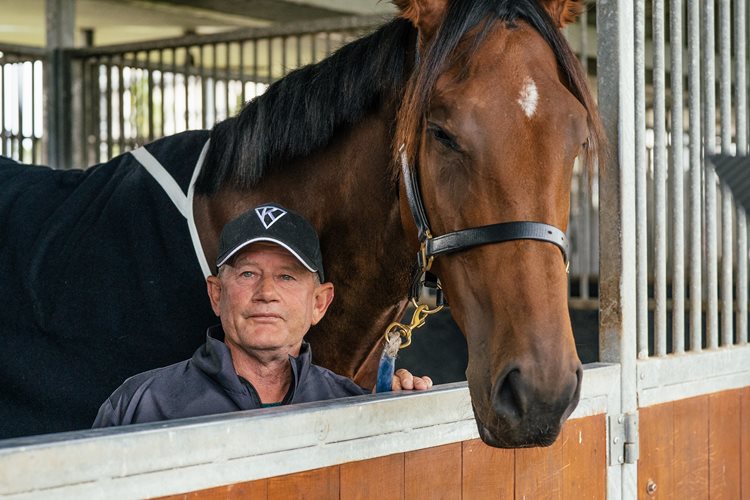 Originally starting out in ownership of a few gallopers, Kennedy has developed his own team of horses, starting out at Pakenham in Melbourne before branching out to their new Flemington facility.

While winning races is a crucial part of what the team aim to do, as stable operations manager Cassandra Norris explains, there is a significant focus on the well-being and care for their gallopers.

“James is incredibly supportive and passionate about the team and Caroline,” Norris said.

“For James, the horses welfare is very important and he has a commitment to them for the entirety of their lives.

“It is something he enjoys.

“It would mean everything to James to win a race like this on Saturday, for us to be able to do that for him as he has been so supportive of the team would be great.”

Jennings boasts an extensive and impressive resume in the equine industry.

She has a degree in Equine Biomechanics from Harper Adams University in the UK, on top of working closely with renowned horse whisperer Monty Roberts and spending time at several stud’s and stables in Australia and New Zealand.

Former jockey and now Kennedy Racing assistant trainer Roger Elliott has been with the yard for the last two years after originally crossing paths with Jennings when they were both working under Gai Waterhouse.

“Everything has steadily got better and better in that time, Caroline spends a lot of time with the horses and really concentrates,” Elliott said.

“We have been getting the results.”

Norris describes Jennings as an “incredible horsewoman” with the stable focusing on producing happy and healthy horses to the races.

“Her philosophy is the horses’ happiness comes first and we have happy horses, that is why we have found success,” Norris said.

“She is very experienced through many disciplines and I think that shows through our results recently.

Aravene, a $235,000 purchase at the Gold Coast yearling sale, most certainly looks like a happy horse leading towards the Group 1 feature for three-year-old fillies over 2200 metres. She travelled up smoothly with Elliott last week from Sydney and has settled into Barry Lockwood’s Eagle Farm stables since.

The daughter of Fastnet Rock has enjoyed a Brisbane swim in the afternoon’s since arriving.

Having won three of her last four trips to the races, Aravene’s rise to now being rated a $4.40 chance with the TAB to claim the Oaks may have surprised some punters.

But, for Jennings, she had long-term dreams for her up-and-coming filly.

Aravene followed up her Victorian second-up victory in early May with a brilliant performance in the heavy conditions at Rosehill almost a fortnight ago, putting more than three lengths on the field in Benchmark 72 grade.

“It was Caroline’s plan right from the start to get to the Oaks,” Elliot said.

“That was the start, when she came from a spell, to get her here spot on with a few runs under her belt. “It has all worked well.

“Nothing seems to worry her at all about making the trip to Brisbane.”

Aravene came from near the back of the field on that day in Sydney under the guidance of in-form hoop Sam Clipperton and her travelling companion says she has only come on from that performance.

“I was a bit worried at the start of the race when she got so far back but she picked them up really easy,” Elliot said.

“She is getting better mentally and physically, she is going great, she has not missed any feed and her work has been good."

In an almost brand new operation with fresh faces to the Group 1 racing scene in Kennedy and Jennings, there is hope Aravene is a horse the team can hang their hat on going forward and really kick-off their continued success at black-type level.

“The team has definitely grown in numbers over the last six months, we have also had more success in that time,” Norris said.

“Aravene is a progressive filly and she has come along in this trip and was very impressive in Sydney.

“She will just keep maturing and getting better.

“We are already proud of her – she has done an amazing job – and it would be amazing for the small tight-knit team to win a Group 1 race like this.”

Champion hoop Brett Prebble will make the trip north to ride the filly after being her partner in her three Victorian runs before she started her northern journey.

Elliot thinks the booking of Prebble is key as the experienced big-race rider knows the horse well and has a close association with Jennings.