Barcaldine the key to Battle of the Bush success

With gallopers coming to town from across the Sunshine State, form lines for the annual Battle of the Bush Final can be tough to line up.

The three winners of the Final since the series’ inception in 2018 have come from far and wide: Dalby, Miles and Mackay.

But, one town’s qualifier has been more fruitful than the others across Queensland, with two of the three winners having won heats at Barcaldine before heading to the city.

For those looking to follow those form lines, Todd Austin’s Kedleston claimed the Barcaldine qualifier in 2022 – the stables home track – with the gelding to jump from a wide gate in Saturday’s 2022 Final.

Another chapter will be written into the BOTB history books this weekend, so we thought we would look back on the paths gallopers took to claim the show piece prize in recent years.

The mare represented the entire Eastern Downs region when she claimed the feature race last year.

Rather Salubrious qualified for the BOTB Final just under a month out from the decider, winning a Goondiwindi heat by just over two lengths under the guidance of apprentice hoop Angela Jones.

It was her second attempt at qualifying for the Final in the series – running second at Jandowae a fortnight before – also with Jones in the saddle.

While the regular town visitor was stabled at Dalby, after winning the Goondiwindi heat, the entire racing district had their eyes on the consistent mare come Final time.

Rather Salubrious backed up her driving BOTB Final win by taking out the Country Cups Challenge Final at Doomben later in the year.

The daughter of Highly Recommended has been doing her racing in the north of the Sunshine State of late, going around at Cairns’ Cannon Park at her last start earlier this month.

It was only a short stint in the care of Bevan Johnson but the stalwart bush horseman certainly made the most of his time with Hanover Square.

The now eight-year-old gelding has collected 74 career race starts over the journey and has gone through the hands of more than a handful of trainers.

But, Johnson has produced the most efficient results from the son on Manhattan Rain’s tenure.

In Hanover Square’s two runs for Johnson, he won a qualifier at Barcaldine to land in the Final and then went on with it at Eagle Farm later that month.

Before he was transferred to Johnson, the gelding had attempted to qualify at Goondiwindi and Charleville in the 2019 series but could not breakthrough until the trip to Barcaldine.

Co-owner Leonard Mawn trained Hanover Square before Johnson took over the conditioning duties and he has returned to Mawn's stable at Chinchilla.

Hanover Square is still racing around the country scene, defeated by BOTB 2022 contender V J Day at his last start at St George in March. 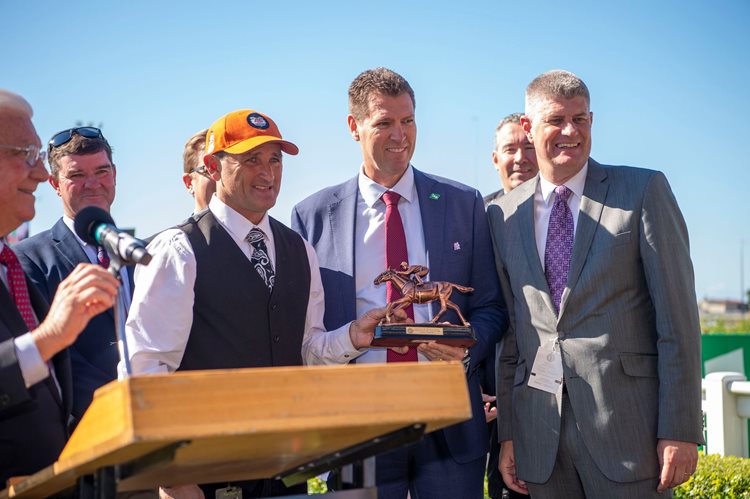 Trainer Olivia Cairns and her team did the hard yards to put themselves in the first Final of the popular series.

In the inaugural edition of the race, veteran gelding Mason’s Chance recorded a memorable victory under the guidance of leading provincial hoop Justin Stanley.

While it was all smiles on Final day, it was plenty of long hours on the road to eventually get there.

Cairns and Mason’s Chance ran in qualifiers at Emerald, Home Hill, Thangool and Bowen before finally forcing his way in at Barcaldine.

While it took him some time to crack a heat, Mason’s Chance did it with authority when he did get in, winning by almost two lengths at Barcaldine.

The stable have tried to chase a fairy tale return to the BOTB Final for a second victory in the popular race this year but like back in 2018, it is not easy to win a qualifier.

He attempted to qualify at Bowen and Emerald earlier this year but could not repeat the feat.

Mason’s Chance is an emergency for Saturday’s race – and enjoyed a recent Gold Coast trial – but it is unlikely the old campaigner will force his way into the field.

Stable mate Ammoudi Bay will carry Cairns’ hopes of lifting her second BOTB title after winning through at Home Hill earlier this year.

Hoop Stanley has been booked for the ride of Ammoudi Bay.