With starters at four different venues this Saturday – including one Battle of the Bush qualifier – Dalby trainer Matt Kropp has been scratching his head around how his stable was going to make it work.

After much deliberation and thought, the experienced trainer has devised a plan with his staff and family to see the barn represented at Ipswich, Toowoomba, Goondiwindi and Burrandowan across the space of a few hours.

The man himself will take gallopers to Goondiwindi, which will see Fair Fella – who is part-owned by Kropp’s father – resume.

In his 90's, the Brisbane-based Clifford Kropp will make the journey alongside Matt to Goondiwindi before spending the rest of the weekend in Dalby with the family.

“It would be a thrill if he could win it for him,” Matt said.

The son of Tycoon Ruler has been an excellent galloper for Clifford and connections, winning on eight occasions from 18 career starts, as well as five minor placings.

He is first-up from a break on Saturday in the Open Handicap over 1000 metres. 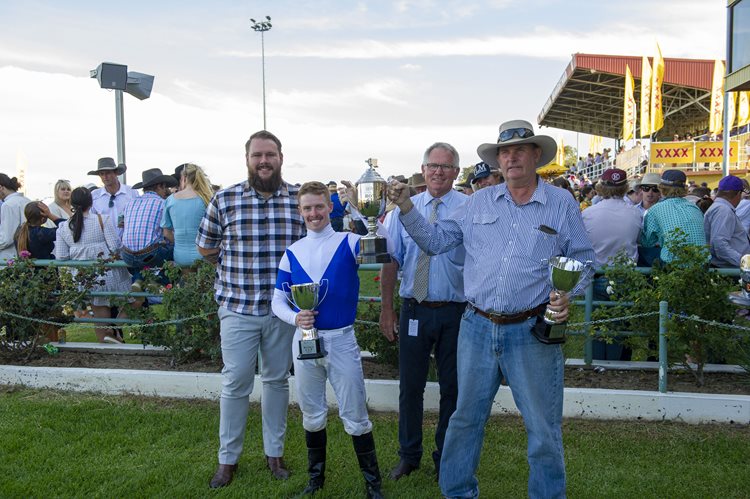 “He has been in and out with feet troubles, so if they have a little bit of give in the track, that will help,” Matt said.

“He is in good shape and I expect him to race well.”

On a different end of the age spectrum in the Kropp family, Matt’s son Will – an emerging trainer in his own right – is unable to help the clan race their horses this weekend as he is attending the Kentucky Derby in the USA.

Tycoon Thunder will carry the stable's BOTB hopes at Burrandowan.

The popular series kicks-off this weekend across the Sunshine State and will comprise 16 qualifiers, culminating in a Final at Tattersall’s Tiara Raceday at Eagle Farm on Saturday, June 25, 2022.

Tycoon Thunder is only a new acquisition for the Kropp barn after being a winning machine in North Queensland last year for vocal trainer Ricky Ludwig on the Atherton Tablelands.

Tycoon Thunder won two heats of the Country Stampede last year but did not end up contesting the Final in Brisbane, with concerns around the five-year-old gelding’s ability to handle long trips on the road.

That is why Ludwig eventually moved him on and while Kropp will need to travel him around to race in the south of the state, the journeys are not as long as what he faced in FNQ.

The son of Written Tycoon has had two runs for the Kropp stable and will need to lug 62kgs to qualify for the BOTB decider.

“He has settled in well and it will be about if he handles the dirt, he has shown that he can adapt to most surfaces,” Kropp said.

“He will be on pace and it is a good little race.

“I think he will acquit himself well and he will not be far away from winning if he does not win.”

After being put up for sale by Ludwig, Tycoon Thunder was quickly snapped up by a group of owners, led by regional racing lover Rob Picking.

Picking and his mates are great supporters of provincial and country racing and will often make weekend's away to watch their runners to all parts of the state. As Kropp details, the cash on offer in bush racing is not close to what you can race for at the metropolitan level, but the winning feeling still is the same.

“They are always on the look out for horses like this one, they just love country racing,” Kropp said of the Picking crew.

“They have a ball and get to most race days where they have starters, they have won a few races over the time at a few places.

“It is good to see fellas in Brisbane that are happy to race their horses in the bush.

“Once they get a taste of it, they love it, it is great that they get away with a group of mates to places like Blackall, Charleville or wherever over the weekend.”

Three BOTB qualifiers will be run on the first weekend for 2022: Burrandowan, Longreach and Mt Isa.

The Burrandowan Picnic Race Club will mark their 100th year of racing in 2022 – with their annual and popular race day this Saturday.